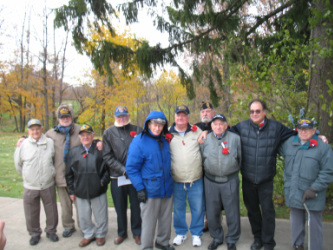 World War II Veteran Fred Isenstadt shared that he was one of the lucky ones.  Burt Siebert identified his Cold War missions flying over the borders of the United States and the Arctic Circle to protect our country from Russia.  Tom Kuskin, Vietnam Veteran is a true hero as he put his country before his own family.  Steve Kannry explained how he lost many of his friends while on Mission in Cambodia. One of his friends that died had the newspaper clipping about the Kent State killings.  Steve looked at the article and noticed that he knew one of the girls that was shot.  We all learned that freedom is not free.

All four men are true heroes.  They exemplify courage.

Music was performed by Mary Jo Widmann and Paul Smith.  A Solo was done by Joy Lipscomb.

This special day honors and remembers the Veterans of yesterday and today.